See you in Albany tonight.
Posted by Drew at 11:09 AM No comments:

Ewa Chrusciel, and myself after our reading at the Union Square Reading Series Saturday. You'd think we were Aaron Burr for all the poetry Hamiltons we were dropping at The Independent.
Posted by Drew at 10:27 PM No comments:

So long Andrew Hill
Posted by Drew at 11:23 PM No comments:

I'll be reading in Boston this Sat, 21st. at The Union Square Poetry Series:

I tend to be interested in literary biography and memoirs, and I already know most of these authors' poetry fairly well. One of the things I became most interested in is how the negative spaces between authors worked to create shapes (and an overall shape) in this engaging collective memoir, and how these negative shapes, shifts between authors, also worked as musical modulations, with contrasting harmonies voiced with different personalities, perspectives, agendas, thoughts and individual histories. The negative shapes between authors build into a kind of shifting image, like a cut-out or stencil, of a group of writers and a time and place. What is interesting to me is that these inverse images seem to contain as much data as the straight-forward biographical detail accumulation does, and that the negative space works in conjunction with the positive to make a kind of social cybernetic drama that has a very particular structural integrity over the course of the whole volume.

Bob Perelman
BP proposes theme of _love_, which he immediately replaces with the theme of _veering_, which produces the theme of _glee_, a sequence and a formulation which is very easy for me to identify with. Veering and love (children and partners, but also inseparable from power interests using concepts of love to control people are developed in this volume. I wish _glee_ had been addressed more.

Barrett Watten
BW addresses mostly two topics: 1) the issue of his own (and the group's one assumes) entering into literary history (gaining social status and questions of who gets credit for what) esp. in his instance of a kind of appropriation of Zukofsky. The Christian religious language used to describe this process creates a _is he putting us on_ effect which I think is intentional. The second issue is competition within the group (between him and BP) Inside this immensely negative framework the concept of _heaven_ as a _reading group_ is proposed -- by which he means the model of a collective writing project as a reading group -- actually very positive and compelling.

Steve Benson
Fascinating shift from BW to SB, like quickly zooming into a high detail interior space. The shift also from the zoomed out, grandiose tone of BW to very cut and dry propositions of SB. I'm not comparing their value, I'm pointing to the effect of the shift. He's addressing how one's tendencies -- okay, one's neuroses -- effects how you deal with the materials and strategies of writing. Explanatory in a compelling way and, at the end of the day, straight to the point.

Carla Harryman
CH's is perhaps the most openly disclosive and the effect of this and the pressure of talking about something difficult in a way that can be understood makes this section the most intense in the volume. I really feel like she's asking herself "who's listening?" which is not an easy consideration. She address conflicting points of identification with a formative Creeley poem and issues of social fantasy scripts for love and gender and the fantasy scripts around war. She equates the two. What do Nada and Gary, of Swoon, think of these assertions -- I'd be curious to know. CH talks of _ playfulness_ which I'm keen on hearing more about but it doesn't get developed here -- not yet.

Tom Mandel
From the intense psycho/epistemological/creative drama of CH, TM opts for a lighter, almost casual tone, riffing more than anyone off others' phrases. He addresses _infatuation_ -- extending the _love_ definition range. Love of the group, in other words, and love of poetry perhaps. Who is he talking about in particular one has to wonder?

Ron Silliman
Sudden shift into an alternate universe effect with adolescent mayhem stories. I could read an entire book of these mayhem sequences. They eventually segue into notes of meeting the other writers. He address the question of the longevity of friendship in activism versus literary activity -- interesting in terms of the dynamics of groups -- the sociology here, and, one would assume, how the products of different groups work. I wish there had been more on this. Brings up Pound and the question of _putting people in touch_ and of reading lists -- questions of how information is shared in groups.

Kit Robinson
KR's section is framed the most positively, by far, rather than defining activities as against something. He's the one writer who chooses to develop the theme of play that is often invoked by others. He describes a scene of playful collaborative collage writing.

Lyn Hejinian
Interesting shift back to negative aspects. Starts with _language bashing_ -- which is about information also -- specifically the phenomenon of people reacting competitively against a poetry group and trying to keep others from knowing it or understanding it -- that is -- actively blocking information. She doesn't say it but presenting this pattern of behavior in the midst of discussing changing and challenging obsolete social scripts can only imply that they were onto something, right?

Rae Armantrout
RA revisits some themes about desire, but is really addressing objectification -- esp. the way in which one presents oneself (thinks of oneself) as an object (and, I assume, considering her poetry, not all in a bad way, but in a complex way) {do the authors assume the readers of the book know their poetry -- they must...} She ends with _pronouns don't go away_ -- a sober note about the extent to which one _can_ consider one's artistic activity to be escaping or challenging literal subjective positions, though it's hard to imagine any of the other authors disagreeing with this.

Ted Pearson
Beautifully written ending piece, and the second one to present itself in almost totally positive terms (not that there's anything wrong with the negative framing -- I'm interested in how negative and positive interact. Now I want to pick up more of Pearson's books.
Posted by Drew at 4:08 PM No comments:

The fact that he may be a writer for adolescents says nothing against him. Adolescents are those most in need of writers.
Posted by Drew at 12:51 PM No comments:

Anne Boyer's blog is over, but I think I can file this under unusual ways to publish poetry:

On the crowded corner of 168th St. and Broadway, a skinny older white woman with long, gray hair was walking slowly down the street with a chalkboard on which she had written the message: YOU HAVE TO BE CATHOLIC TO GET INTO HEAVEN.

Immediately broke out in spontaneous laughter.
Posted by Drew at 11:13 PM No comments:

Interesting pairing in that both writers are also priests (as opposed to defaulting to the role of priest accidentally, as some poets do)

O'Leary is the literary executor of Ron Johnson. This fact immediately focused my interest -- and perhaps biased my listening. When I lived in San Francisco in the early 90s, Ron lived down the street in the Mission, and I was part of group of writers, including Elizabeth Robinson, who would go over to his place, read poems, talk, gossip, shoot the shit, etc. In Johnson's writing, he will sometimes (esp. in Ark) anchor some almost otherworldly condensed baroqueary with passages explicating the physiology of human perception. I noticed a parallel in O'Leary's reading, though having more to do with the science of mood? Serotonin reuptake?

Meditative poetry, calm on its surface, but with unusual, fascinating Brownian motion once you get inside it for a while. It is unfailingly oriented toward objects of thought, with patterns of language play that render the thought more complex without exactly developing it, deepen it without creating a space wherein it is any farther away, and intensify it's intrigue without rendering it vague.

"I kiss you, tongue in my check"

"It was a banal tree, they grew in marches"

"I hate nothing, I've exhausted all genealogies"
Posted by Drew at 12:47 PM No comments:
Newer Posts Older Posts Home
Subscribe to: Posts (Atom) 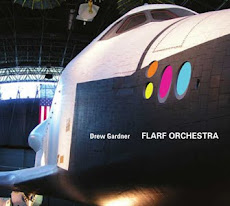